Harish Salve has been an inspiring figure for all professionals. However, few have had the opportunity to see how he performs in Court.

Fortunately, young professionals wanting to know how legendary lawyers argue matters in Court can listen to the arguments of Harish Salve before the International Court of Justice (ICJ) and imbibe the qualities there from.

Salve made ten cogent points before the ICJ. He spoke in a slow and measured manner, ensuring that the learned judges are able to grasp each point before moving on to the next.

His arguments have ben nicely summed up by news18.com:

(i) The proceedings are farcical and an unjust trial by a Pakistani military court in egregious violation of the rights of consular access has led to serious miscarriage of justice;

(ii) An innocent Indian national has been incarcerated in Pakistan for more than a year on concocted charges. He is deprived of his rights and protection accorded under the Vienna Convention. He has been held incommunicado… and faces imminent execution;

(iii) Pakistan has repeatedly denied consular access to India and no document of Jadhav’s trial process was given by Islamabad;

(iv) All requests for consular access to Kulbhushan Jadhav have fallen on deaf ears;

(v) Human rights which are treated as basics in other civilized countries have been thrown to the wind by Pakistan;

(vi) Jadhav was framed on confessional statements extracted from him when he was in Pakistan’s military custody;

(vii) Jadhav has been denied his right to seek legal counsel. There is an immediate threat to him to be executed even before a judicial decision is passed;

(viii) Pakistan has not provided the charge sheet, evidence or materials presented against Jadhav in the case despite repeated requests by consular officers;

(ix) Jadhav has neither consular access nor legal representation even at this stage. It’s not known if Jadhav will seek clemency in Pakistan court. Pakistan will be guilty of war crimes if ex-Navy officer is hanged;

Harish Salve’s masterly arguments before the ICJ drew praise from citizens of all walks of life.

Pakistan claims “confession” by Kulbhushan Jadhav led to his conviction

Pakistan put up the preposterous defence before the ICJ that Kulbhushan Jadhav’s guilt was proved because he “confessed” to the alleged crime.

Even a rookie lawyer who is still wet behind the ears knows that a so-called “confession” extracted from an accused in custody and under duress is never admissible as evidence.

Such “confessions” can never be termed “voluntary” and used as a basis to convict a person to any offence, leave alone a death sentence.

Pak says Kulbhushan Yadav confessed being a RAW spy. Give me a Paki for 2 hrs & he will confess he is a hologram from a Russian satellite.

Naturally, the ICJ rubbished the claim of Pakistan and refused to take the so-called confessional video on record.

Pakistan complains of “ambush” by India

The Pakistani defence was clearly in disarray. They pleaded for an adjournment and complained that they had been “ambushed” by India.

This is a frivolous contention and appears to be a last-ditch attempt to salvage the situation.

Harish Salve’s noble act of charging a token fee of only Rs. 1 for defending Kulbhushan Jadhav endeared him to all citizens.

This is especially important because he is under no compulsion to work for free. The Government would have unhesitatingly paid him his full fee for the matter.

Lets take a moment to thank #HarishSalve who takes 18 lacs/ hearing. But fighting for #KulbhushanJadhav with only 1₹ as his fees. ?????????? pic.twitter.com/xsRWBeFK4J

Some citizens drew an unfortunate comparison between Harish Salve’s act of waiving his fee and that of Ram Jethmalani charging Rs. 4 crore for defending Arvind Kejriwal in the defamation suit filed against him by Arun Jaitley.

At 94 @RamJethmalani5 salivates for Money as was seen by his bill to Delhi Govt on a private case. Whereas Harish Salve charged Fee of Rs.1? pic.twitter.com/2W8fOIbsIm

The unfortunate aspect is both luminaries, Arvind Kejriwal and Ram Jethmalani, adopted a belligerent stance when questioned as to why the “Aam Aadmi” of Delhi was being made to foot the mind-boggling fee.

Arvind Kejriwal claimed that he is a “poor” man and cannot afford to pay legal fees and that the public has to foot the bill. 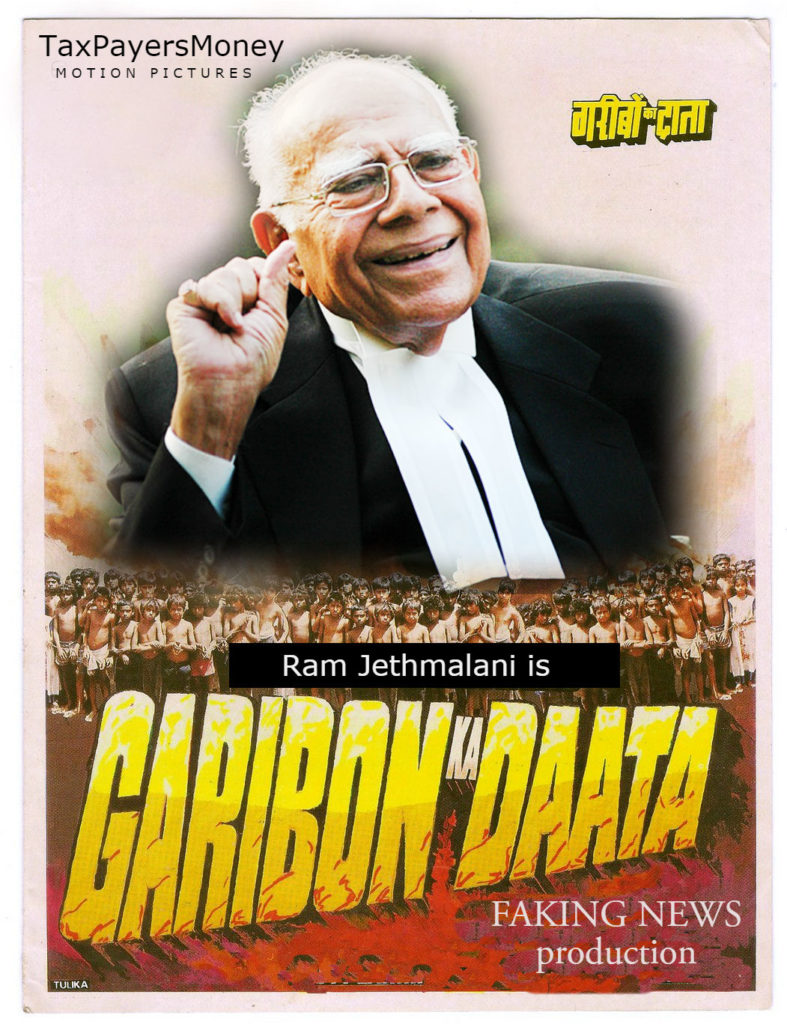 Ram Jethmalani initially claimed that his fees are reasonable and that he had given a “discount” to Arvind Kejriwal. Later, he claimed that the opposition against his fees was orchestrated by the political parties.

Fortunately, after the Indian Express and other press reports raised a hue and cry and pointed out that the fee payable to Ram Jethmalani would meet the expenses on paying salaries and pensions to hundreds of school teachers, better sense prevailed and Ram Jethmalani agreed to consider Arvind Kejriwal a “poor client” and argue the defamation matter for free.

Citizens heave a sigh of relief

Both living legends of the law have caused the citizens of the Country to heave a sigh of relief, although in different ways!