Ram Jethmalani, the nonagenarian Jurist, has so far been a role model for junior advocates owing to his qualities of hard work and never-say-die spirit. However, his recent conduct whilst defending Arvind Kejriwal has baffled his numerous fans and followers because it appears to be in serious breach of ethics and the code of conduct

Practice of law, a noble profession

“There are three ideas involved in a profession: organisation, learning, and a spirit of public service. These are essential. The remaining idea, that of gaining a livelihood, is incidental.” – Roscoe Pound

The immortal quote by Roscoe Pound, the eminent legal scholar, that law is a ‘noble profession of service to mankind’ and that earning a livelihood is “incidental” has inspired several generations of advocates over the years.

One expects eminent senior advocates to set an example of this virtue by conducting themselves in an appropriate manner so that junior lawyers can emulate them and walk in their illustrious footsteps.

Harish Salve, the CA turned lawyer, has provided a stellar example of this by defending Kulbhushan Jadhav, who has been falsely sentenced to death by the rogue Government of Pakistan.

While Harish Salve could have demanded his regular fee, he chose to charge a token fee of only Rs. 1.

This has imparted the strong message to all young lawyers that they should never be opportunistic and seek to take advantage of the desperation of the client. Instead, they should place the interests of the client above their own personal interests.

In contrast, Ram Jethmalani demanded a whopping fee of Rs. 4 crore for defending Arvind Kejriwal, who has been accused in a personal capacity of defamation by Arun Jaitley, the Union Finance Minister.

Worse, Ram Jethmalani expected the fee to be footed by the poverty stricken populace of the State of Delhi.

When questioned as to why the public should foot the bill while Arvind Kejriwal goes around hurling wild and baseless allegations against all and sundry, the AAP party spokesman offered the justification that Kejriwal is “pennyless” and cannot afford to pay fees from his own resources.

Anyway, the press raised a hue and cry that the said amount of Rs. 4 crore could be put to better use for providing medical and education facilities to citizens etc.

Pursuant to the outrage amongst the citizens, Ram Jethmalani said he would waive his fee and work for free. 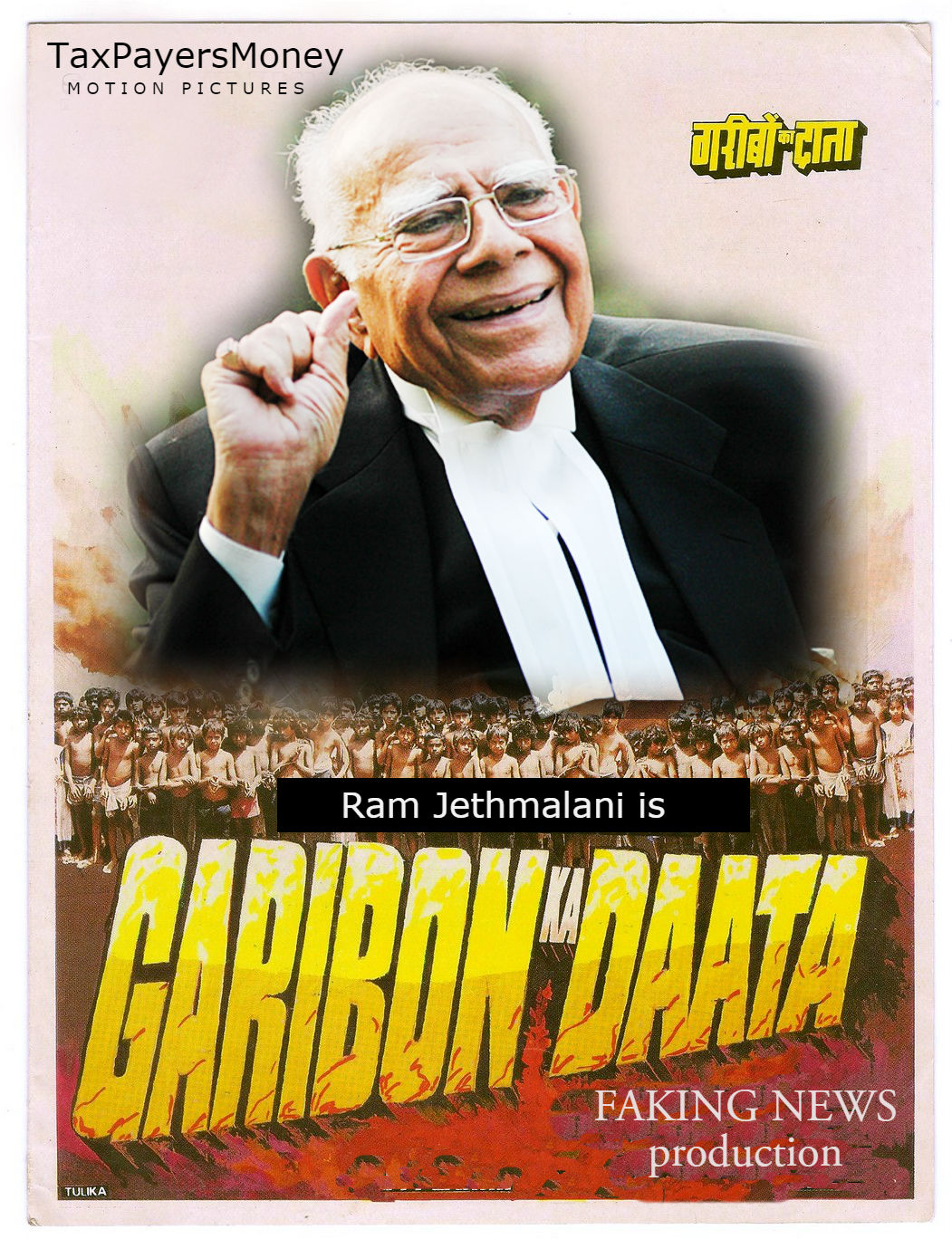 Arun Jaitley, also an accomplished lawyer, cleverly outwitted the duo of Kejriwal and Jethmalani and turned the tables on them.

Jaitley asked Jethmalani whether he used this word on instructions from Kejriwal, to which the reply was in the affirmative.

This forced Kejriwal to do a somersault and disown the statements of Jethmalani.

Arvind Kejriwal “lied” that he has not given instructions

While Ram Jethmalani could have withdrawn from the case in a dignified manner, he chose to make a spectacle of himself by accusing his client of “lying”.

“The reason behind this is that he has spoken a lie. He has gone and said that he has not given me any instructions. He had given me instructions, I had recorded it… I have told him that I am no longer appearing. He doesn’t want a lawyer now, probably will settle with Arun Jaitley,” Jethmalani told the press.

Demand for fee of Rs. 2 crore

To compound matters, Ram Jethmalani has not only abused his client in public but also demanded that a fee of Rs. 2 crore be paid for his services.

“Nahi dega, toh nahi dega (If he doesn’t pay, he doesn’t pay), I work for thousands of people for free,” he said in a contemptuous tone.

He also hinted that Kejriwal is a “crook”.

“I am not disappointed about one crook who is going to jail, one who is going outside. Pura duniya bhara hua hai with crooks. (The entire world is full of crooks).”

“Letter Bomb” to client with copy to opponent

In a shocking move, Ram Jethmalani has addressed a letter to Arvind Kejrwal in which he claimed that the latter had used “worse abuses than crook for Arun Jaitley”.

“When Arun Jaitley filed the first suit and criminal case, you naturally sought my services. Ask your conscience how many times you used worse abuses than a mere ‘crook’. You have hundred times asked me to teach this crook a lesson.”

The letter has been made public and is published on Jethmalani’s blog.

In the letter, Jethmalani also offered a compromise on the fees stating that Kejriwal should “pay the settled fees for the first matter and nothing for the second”.

Citizens outraged at lack of propriety by law legend

Naturally, the move by Ram Jethmalani has met with disbelief and disgust from citizens.

What happened to attorney client privilege? Why is this guy leaking every information they discussed when he was Kejri's Lawyer? ?

And being his lawyer he didn't advise Kejri against it but carried out his instructions. This man is a lawyer?

Isn't there something called client attorney privilege? This man is ridiculous.

Both Kejriwal & Jethmalani exposed. Shame that such a senior lawyer can do anything for money. Good, Ram Jethmalani did not become a Judge.

Lol!! I think Ram Jethmalani should now sue Kejriwal. That will keep the entertainment going on.. https://t.co/U7rLsgs3aH

#TNExclusive Ram Jethmalani claims that Delhi CM had instructed him to use derogatory words against FM during defamation case hearing pic.twitter.com/2iPqzIw12V

Kapil Mishra, the estranged AAP leader, has made the sensational claim that Arvind Kejriwal has “pleaded with folded hands” that he should be forgiven for making the defamatory statements against Arun Jaitley.

AK also promised to this BJP leader that he will be giving written apologies to Arun Jetly on defamation case.
3/n

The entire episode has left a bitter taste in the mouth as to the manner in which highly respected and accomplished professionals are behaving. Hopefully, better sense will prevail amongst the law legends before it is too late for redemption!